Actu 9 : (Anglais) What Near-Death Experiences Teach Us About the Brain – Elemental

You Are Currently Here:Accueil > Actualités > Actu 9 : (Anglais) What Near-Death Experiences Teach Us About the Brain – Elemental 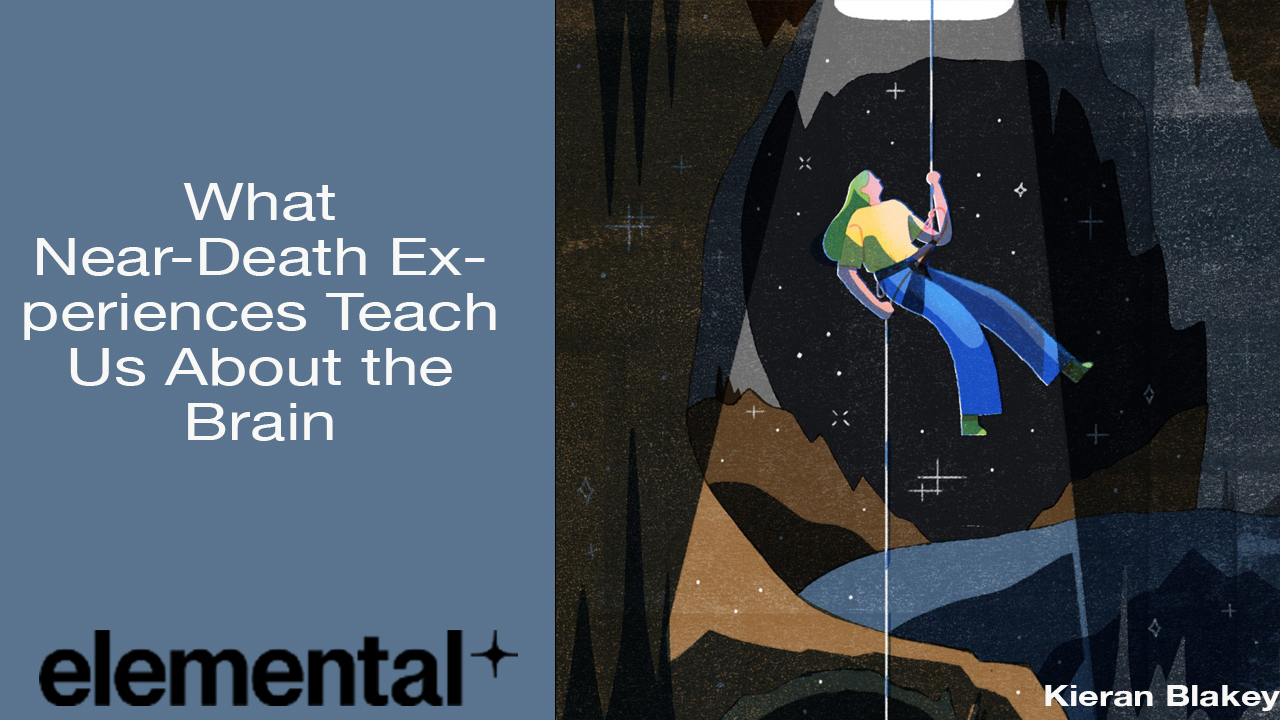 The man claimed that in the middle of his quadruple bypass heart surgery — during which he was fully anesthetized and his eyes were taped shut — he had “come to” and found that he was looking down at his own body and the doctors preparing to operate on it. He described the scene in detail, and he recalled that his surgeon had waved his elbows in the air as if he were mimicking a bird flapping its wings.

Later, when asked about his patient’s peculiar account, the truck driver’s surgeon confirmed that he had indeed waved his elbows in the air. He explained that, in order to avoid contaminating his gloved hands before a procedure, he would place his palms on his chest and point with his elbows — an uncommon practice that his patient couldn’t have seen or anticipated.

Bruce Greyson, MD, is a professor of psychiatric medicine at the University of Virginia. In his new book, After, he describes the truck driver’s near-death experience (NDE) and many others like it. Greyson spoke with both the truck driver and with his surgeon, and he tried to pin down the source of the man’s uncanny recollections. But his efforts only deepened the mystery of the man’s apparent out-of-body perceptions.

After studying NDEs for decades, Greyson says that much of what he’s learned has been hard to square with prevailing notions of how the mind and brain work. “Our common assumption is that the mind, or consciousness, is just what the brain does,” he says. In other words, the mind and the brain are one and the same. They’re inseparable. “There’s a lot of evidence for this,” he adds. “When you get drunk or you get hit on the head, you don’t think very well.”

But, paradoxically, NDEs often occur when the brain is heavily disabled or even measurably inactive. “The evidence we have from NDEs seems to suggest that the mind and brain can dissociate under extreme circumstances,” he says. “Somehow, the mind can continue to function when the brain seems to stop.”

What we know about NDEs

For one thing, they’re surprisingly commonplace. Estimates vary, but most research efforts have found that somewhere between 10% and 20% of people who come close to death — for example, they suffer a perilous accident, or their heart stops — say that they experienced one or more features of an NDE.

For a 2014 study in the journal Resuscitation, researchers found that roughly one in 10 people who survived a cardiac arrest episode reported an NDE. Furthermore, 2% of these survivors were able to recall some of what was happening as doctors worked to save them — recollections that the study’s authors could not explain.

NDE’s are not only common, but their features are also fairly consistent. The sense of floating above one’s body, and also the ability to recall in detail events that took place during periods of apparent unconsciousness, are not rare. Some other distinctive features of NDEs include an awareness of being dead or near death, a surge of pleasant or euphoric sensations, the perception of time slowing down, encounters with god-like entities or deceased loved ones, and lucid recall of memories — almost like a detailed highlight reel of one’s life.

Not all of these experiences are unique to NDEs. Some researchers have drawn parallels between near-death experiences and REM sleep disturbances, which can likewise induce vivid hallucinations and out-of-body sensations. Other experts have highlighted the apparent overlap between NDEs and the experience of taking psychedelic drugs such as ketamine and N,N-Dimethyltryptamine (DMT). Like NDEs, these drugs can induce the sensation of leaving or transcending one’s body, of time slowing down, and of perceiving or communicating with supernatural entities.

Some have pointed to these parallels as evidence that, while bizarre, NDEs are surely the output of neurochemical processes or other conventional brain operations. “Near-death experiences are the manifestation of normal brain function gone awry,” wrote the authors of a 2011 study in Trends in Cognitive Sciences.

While this seems almost self-evident, Greyson disagrees with this conclusion. He says that scientists who take this view tend to simply ignore the many documented NDEs in which people describe, in startling detail, events that took place around them during periods of unconsciousness. “People who have had both an NDE and a psychedelic drug trip say that they are not the same experience,” he adds. “The accurate out-of-body perceptions — you don’t have those with drug trips.”